Introduction: This study identifies and reviews published reports of training techniques for laparoscopic donor nephrectomy (LDN) in search of commonly utilized training methods as well as metrics of competency for the performance of LDN. The technique evolution in donor nephrectomy has been driven by the need to provide a safe yet less impactful operation for altruistic kidney donors. Minimal access surgery has accounted for the major reductions in patient morbidity in donor nephrectomy. In an era where quality improvement practices in surgery seek objective indicators for assessing procedural competency, the process by which surgeons train and demonstrate competency in laparoscopic donor nephrectomy (LDN) is poorly outlined for surgeons wishing to adopt this procedure and institutions required to credential surgeons in LDN.

Methods: Using PubMed, OVID, and Cochrane library databases, the terms “training”, “learning curve”, “animal model”, “education”, “single incision”, “single site”, and “robotic” were each combined in Boolean searches with “donor nephrectomy” to identify articles pertaining to training experiences in donor nephrectomy. All abstracts were reviewed for relevance by two reviewers. Abstracts were excluded if the study did not pertain to the introduction of a laparoscopic technique for donor nephrectomy. If not enough detail was given in the abstract, the manuscript was reviewed for training techniques employed by the surgeon and/or team introducing LDN. All relevant manuscripts were reviewed by 3 reviewers for the surgical technique being introduced, use of animal models, co-surgeons, surgeon specialty and prior training, institution type and volume, and how the training method was assessed. Frequency data was calculated where appropriate.

Results: Forty of 291 articles identified described training methods in LDN. Most described the evolution from open donor nephrectomy to LDN (85%). The majority of articles were from academic centers and centers performing less than 25 donor nephrectomies each year (85% and 46% respectively). The learner was an attending surgeon 90% of the time, most commonly a urologist with prior experience in laparoscopy or open nephrectomy. Simulation-based training methods were discussed in 4 articles, all of which described the use of porcine models. The proffered learning curve averaged 35 cases (range 10-95) measured as a decrease in operating time. Improved intraoperative, patient and recipient outcomes were observed for centers performing ≥50 LDN annually when compared to centers with an annual volume of <25. Co-surgeons were mentioned in 13 articles and were found to decrease blood loss and OR time, with no observed difference in patient outcomes.

Conclusions: Current Organ Procurement Network recommendations of 15 cases as surgeon or assistant for LDN fall well below the learning curve for high quality outcomes in LDN as described in the literature. Though simulation has demonstrated utility in ascending the learning curve for LDN, it is rarely discussed or evaluated as a training method. The assessment of training and competency for LDN is heterogeneous and objective learner-based metrics could help surgeons and institutions safely reach a quality standard for performing this high stakes operation. 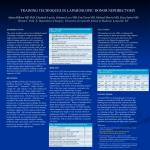