INTRODUCTION
A vesico cutaneous fistula is an abnormal congenital or acquired opening that connects the urinary tract to the skin surface. They usually appear after prolonged suprapubic catheterization or any other procedure on the anterior vesical wall.

Case report
A 62-year-old male with history of sigmoidectomy and Hartmann’s procedure for complicated diverticulitis and latter incisional hernia, which was repaired by laparoscopic IPOM three years ago. He was admitted with urine draining from the stoma scar. A fistulogram and a CT scan were completed; they revealed a 7cm length path connecting the stoma scar on the left inferior quadrant of the abdomen to the bladder. Cystoscopy was normal. The fistula was canalized with a Franklin® colangiography catheter, then the fistulous path was identified and totally removed laparoscopically. In the same procedure the prosthetic material (meshoma) was identified proximal to the bladder and it was removed.

Discussion:
Usually the etiological factors include trauma, radiation, vesical diverticula, obstetric complications, orthopedic surgery, radiation among others. Surgical correction is imperative as there is a risk of life-threatening complications like sepsis. Treatment must be individualized; conservative management is not effective in all cases.
Enterocutaneous fistula is a known late complication of prosthetic mesh repair of incisional hernia and is usually due to chronic erosion of bowel by mesh placed in direct contact with intestinal loops both in open and laparoscopic repairs, nevertheless, vesicocutaneous fistula associated to mesh repair has not been widely described in literature.

Conclusions:
Vesicocutaneous fistula has a tremendous impact for the patient and on the quality of life. The constant leakage of urine results in maceration and eventual destruction of skin with ensuing infection, discomfort, and malodor. Laparoscopic approach offers a minimally invasive procedure with low morbidity and favorable outcome. To our knowledge, this is the first case described in literature. 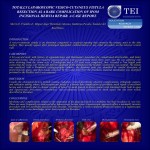