Natural orifice transluminal endoscopic surgery (NOTES) is expected as the next major frontier in minimally invasive surgery. Before the widespread use of NOTES, there are some problems to be solved: attaining visual field, technical improvements as well as issue of safety. Now, the hybrid of transumbilical laparoscopic and natural orifice transluminal endoscopic procedures has been proposed as a bridging technique to NOTES. We performed totally intracorporeal right colectomy under transvaginal laparoscopy followed by transvaginal specimen extraction in selected 4 patients. The procedure was performed after receiving informed and written consent and approved by the Ethical Review Board of Tachikawa Medical Center. We hereby report a feasibility and safety of our technique.

(Surgical Procedure)
An incision of 10mm was made at the base of the umbilicus and a 12mm port was inserted and the abdominal cavity was insufflated to 10 mmHg. 5mm or 10mm flexible-tip rigid laparoscope was inserted through this port. A 5mm port was placed on the left upper-quadrant. A instrument of 2mm was inserted as an assist device at right lateral abdomen if needed. An additional port of 12mm diameter and 15mm length was inserted through the vagina under laparoscopic vision. A good visual field was obtained by the transvaginal laparoscope while the surgeon was able to perform surgery through the umbilical and left upper quadrant ports: the right side colon was resected with D3 lymphadenectomy and anastomosed with the conventional maneuver under transvaginal laparoscope. The resected specimen could be extracted through vagina, and the hall was sutured manually through vagina by a gynecologist.

(Results)
From November 2011 to May 2012, 4 elderly female patients were underwent this new operation. The mean age was 81, and none had previous abdominal or pelvic surgery before. Ovarian cyst of 7cm in diameter was observed in one patient and transvaginal oophorectomy was performed at the same time. In this patient, additional port was made at the left lower abdomen to hold and stabilize the large cyst. Another has prolapse of uterus and trans-vaginal hysterectomy was added.
The operation time was 300 min, and the blood loss was 16 ml in the average.
Cytological examination of the fluid in the remnant colon was carried out in 3 patients, but no malignant cells were observed. The pathologic analysis of the specimen revealed adequate lymph node counts and margins.
None required conversion to open surgery and the postoperative course was uneventful without vaginal drainage or bleeding, and other complications. The median length of hospital stay was 8 days.

(Conclusion)
The extent of visual field of transvaginal laparoscope did not differ from that of conventional trans-umbilical laparoscope. Because the operator can manipulate the two forceps from remote positions in the same way as a conventional laparoscopic surgery, this procedure was thought to be safer and easier than a single port surgery or NOTES.
Early experience of the hybrid NOTES with transvaginal laparoscopy was successfully performed and considered to be easier and safe. A comparative studies would be needed to confirm this. 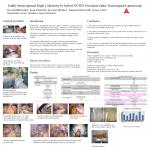