Tools for One Port Laparoscopy Surgery

The One Port Laparoscopy (1PLS) is a unique form of single port technique developed over fifteen years, using the assistance of different types of percutaneous needles. We used the leash and three types of needles: the Laparoscopy Rein, Hook and Suture Passer Needle. The use of the needle assistance has solved the problems in exposure of the Calot, which is encountered in most single port techniques.

This paper presents our statistics in 2431 cholecystectomies. Our analysis was focused on three factors: Safety, Effectiveness, and Cost.

Safety was supported by a non-compromise exposure. The effectiveness is shown by the 96% feasibility, and the 4% conversion rate to laparoscopy or laparotomy. Costs were analyzed by a comparison between the different kinds of instruments used in single port techniques and our percuatneous needles in 1PLS.

The traditional laparoscopic cholecystectomy with multi-ports is now considered to be the gold standard for cholecystectomy. However, all other Single Port techniques continue to be criticized as a great disadvantage because of the physical restriction to free movement of instruments from a single platform, having to adapt instruments, modifying his angle structures, curving it, and transforming opticals, tweezers and tools to ensure safe exposure and triangulation. This is critical, the exposure of the Calot triangle should be optimum and it should not compromise the view of the vascular and bile ducts during dissection and section. 1PLS was performed with less morbidity and mortality rates than those reported for the traditional laparoscopy and single port incision. The percutaneous needles are a useful tool for port reduction as well as for the NOTES techniques, providing an effective triangulation exposure of the Calot triangle.

These percutaneous needles are a cost contained, and safer alternative that should be considered by surgeons wishing to go beyond traditional laparoscopy. 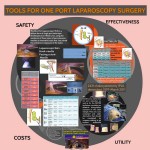