TOBACCO USE DOES NOT CONTRIBUTE TO COMPLICATIONS AFTER CHOLECYSTECTOMY: A RETROSPECTIVE CHART REVIEW

INTRODUCTION: Laparoscopic cholecystectomy is an extremely common procedure in the United States, with over 700,000 cases performed annually.  Despite the procedure’s overall safety, there has been some evidence that tobacco use is associated with increased risk of wound infection after LC.  This retrospective chart review sought to examine whether tobacco use is associated with increased complications following laparoscopic cholecystectomy within a high-volume healthcare system.

METHODS: After IRB approval, 900 of approximately 3,000 cholecystectomies performed within one four-hospital system between 2009 and 2015 were randomly selected, and patient charts were retrospectively reviewed.  Pre-, intra-, and postoperative data were collected, including all complications within 90 days.  Tobacco use cohorts were defined as follows: never, former (any historical tobacco use), and current (active tobacco use within 1 year of surgery) per the ACS NSQIP Surgical Risk guidelines.  Following preliminary data analysis, multivariable logistic regression models were generated to identify whether tobacco use was predictive of outcomes of interest. 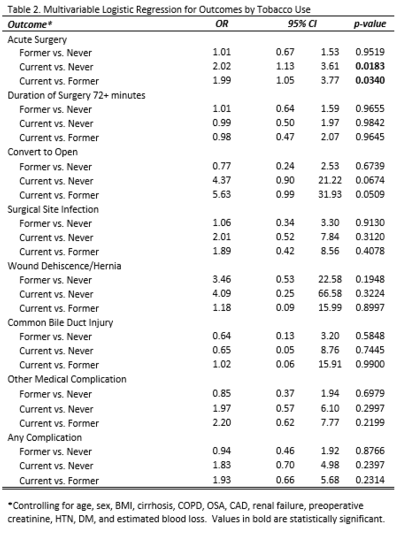 Of the 900 cases analyzed, 535 patients (59.4%) were never smokers; 31.3% were former smokers, and 9.2% were current tobacco users or had quit less than 12 months prior to surgery.  There were 17 surgical site infections, one wound dehiscence, one port site hernia, three common bile duct injuries, and 44 medical complications requiring prolonged hospitalization or readmission within 90 days.

Current tobacco users were significantly more likely to undergo urgent surgery (following emergency admission or direct admission to the hospital) than former or nonsmokers.  However, there was no difference between cohorts for prolonged duration of surgery, conversion to an open procedure, surgical site infection, wound dehiscence or hernia, common bile duct injury, or other medical complication.  There was no significant difference between cohorts when all postoperative complications were pooled.

CONCLUSIONS: There does not appear to be a significant difference in 90-day surgical outcomes or complications in active tobacco users vs. former or non-users.  Although studies in other surgical settings have indicated a possible reduction in complications if patients abstained from smoking prior to surgery, this may not be beneficial in laparoscopic cholecystectomy.  Moreover, as current tobacco use appears to be associated with higher rates of urgent surgery, these patients may not be able to stop smoking prior to an elective procedure.  Prospective studies to further clarify whether there is any benefit towards tobacco cessation prior to LC may be valuable.