Aim: Our hospital adopted 3 D (three-dimension) laparoscope (Olympus) on December, 2014. We compared sigomoidectomy operation time between before and after 3D laparoscope adoption. The operation time before induction, 2013 until November 2014, and operation time by 3D scope after December 2014 up to August 2016. The reason why the compared object was laparoscopic sigmoidectomy was that it was designated procedure by endoscopic surgical skill qualification examination of JSES (Japan Society for Endoscopic Surgery).

Material & methods: Seventeen surgeon participated in this analysis. Two surgeon were qualified by endoscopic surgical skill qualification examination of JSES. Six was staff surgeon, and others were senior residents. There were fifteen lap-sigmoidectomy under 2D scope (Olympus Visera Pro) during January 2013 and November 2014, and forty six lap-sigomoidectomy under 3D scope (Olympus Endoeye Flex 3D) after December 2014 to December 2015. SPSS one-way analysis of variance was performed and mean ± standard deviation was shown, P value less than 0.05 was considered as significant.

Discussion & conclusion: 3D scope was useful for understanding how the target organ or layer was deep. These easier understanding about anatomy was beneficial for younger surgeons and was considered as 3D scope made shorten learning curve of laparoscopic surgery. 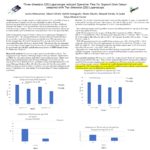