Laparoscopic foregut surgery is commonly performed for the treatment of foregut pathology, including gastroesophageal reflux, achalasia, as well as paraesophageal and hiatal hernias. Often, these cases are elective. One potential major complication of this technique is inadvertent enterotomy, which occurs with a frequency of approximately 1%. In some series, up to 16% of these perforations are discovered postoperatively, which leads to additional interventions, increased length of stay, and significantly higher morbidity. We describe a technique for intraoperative detection of foregut enterotomy using a custom thermal imaging camera.

A custom thermal laparoscope prototype was developed as a modification to a commercially available FLIR Lepton thermal camera. Porcine esophagus and stomach were used for experimentation after being warmed to room temperature. The thermal camera was mounted 20-cm from the specimen. Ice water was used as a contrast agent. Using a Toomey syringe, 60-cc of ice-water was injected through a 22 French Foley catheter which was secured in the proximal esophagus. Control images were obtained in the native, undamaged foregut. A scalpel was used to create a small enterotomy in the distal esophagus and ice-water injection was repeated during image acquisition.

Thermal imaging was capable of defining foregut anatomy (Figure 1). In the native, undamaged foregut, the contrast stream was not visible in the enteral lumen. After creation of a 2-mm enterotomy in the distal esophagus, the ice-water injection was repeated. The thermal imaging camera clearly demonstrates a stream of contrast leaking from the enterotomy (Figure 2).

Thermal enterography is capable of detecting an enterotomy using a universally available and low-cost contrast agent. This technique can be performed intraoperatively, during both laparoscopic and open procedures.  This affords the surgeon an opportunity to repair the potentially missed enterotomy during the index operation, reducing the likelihood for a morbid and costly complication. Future work involves in vivo experimentation and miniaturization of the prototype thermal imaging camera. 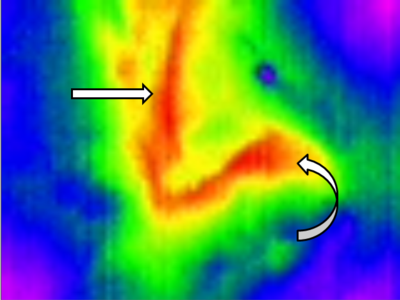 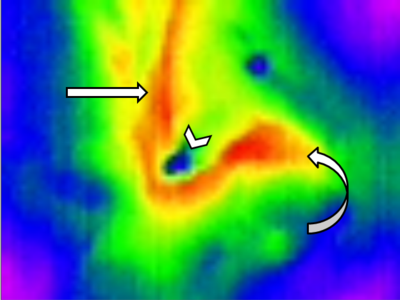