Introduction:
The Zone of Proximal Development (ZPD) is the potential gain conferred by mentored over independent training. This study aimed to investigate the ZPD in laparoscopic skill acquisition in novice surgeons using simulated laparoscopic cholecystectomy.

Methods and Procedures:
Seventeen surgically naive medical students performed 10 consecutive laparoscopic cholecystectomies on a virtual reality (VR) simulator. They were randomised into two groups; (i) eight into an intervention group who received structured, mentored training for procedures 1-9 (ii) nine into a control group (self-directed training). Procedure 10 was performed independently by both groups. Laparoscopic surgical and cholecystectomy knowledge was tested before the first, fifth and tenth operation using a structured written test. Simulator metrics were recorded for all operations. The surgical quality of procedures 1, 5 and 10 was assessed by two blinded, independent raters using the Competency Assessment Tool (CAT). Outcomes were compared using the Mann-Whitney U test. Proficiency gain curves were plotted using curve fit and CUSUM curves.

Conclusions:
Structured mentored training is an important and effective training intervention and a ZPD could be observed in this study. Self-directed training may be applicable for the gain of manual skills, but not for the acquisition of complex procedural skills. 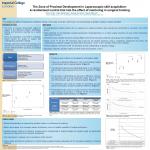