The Wimat Colonoscopy Suitcase Is a Valid Simulator for Polypectomy Training

Objectives: The aim of this study is to establish if the WIMAT colonoscopy suitcase has construct and concurrent validity for colonic polypectomy training. This is a novel ex-vivo porcine animal simulator which can be used to recreate a range of polypectomy procedures.

Conclusion: This simulator demonstrates good construct and concurrent validity for use in colonic polypectomy training. The model can be reliably adjusted to provide varying degrees of difficulty according to the experience of the user. 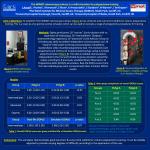