The usefulness of the Volume Rendering Simulation in laparoscopic colectomy for transverse colon cancer.

The University of Tokushima

[Materials and methods]
Thirty-six patients with colon cancer in middle colic venous area who underwent laparoscopic colectomy were enrolled. The Volume Rendering images were created from Multi Detector CT (MDCT) and the variations of middle colic vein were simulated before the operation. The operation time and blood loss were compared before and after the introduction of VRS (before : 5 cases/ after : 31 cases).

1. Duodenum wall was detected and superior mesenteric vein was exposed with medial approach.

3. The middle colic vein was clipped according to the variation based on Volume Rendering image.

4. The transverse colon was mobilized with lateral approach from the craniad port.

[Results]
The variation of middle colic vein: Type A (flowing into superior mesenteric vein (SMV)) was 94% and type B (flowing into gastrocolic trunk of Henle) was 6%. The operation time after VRS was significantly shorter than before VRS (217±32min vs 236±42min). In addition, the blood loss after VRS was decreased (12±5ml vs 48±8ml) compared with before VRS.

[Conclusions]
In laparoscopic colectomy, the VRS makes it possible to dissect the vessels safely. This technique is useful as the preoperative simulation. 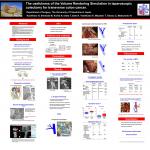