Introduction: The pylorus-preserving gastrectomy for patients with early gastric cancer is one of limited surgeries, which intends to preserve gastric functions.

As the laparoscopic surgery is widely performed, it has greatly increased the understanding of micro anatomical that is done by expanding vision effect. This makes it feasible to preserve infrapyrolic vessels and vagal nerve, which also enables us to perform minimally invasive surgery.

Indication and surgical procedure: Laparoscopy-assisted pylorus-preserving gastrectomy (LAPPG) was performed to the intramucosal or submucosal carcinoma located in the middle thirds of the stomach without lymph node metastasis.

This study examined 26 gastric adenocarcinoma patients who had underwent LAPPG at our institution between January 2013 and December 2015.

The median age was 64 years old (32-82 years old) including 17 men and 9 women. The operation median time was 260 minutes (180-336 minutes), and the amount of bleeding was 50 ml (5-227 ml). The median of the hospitalization was nine days (7-16 days). The three patients had delayed gastric emptying (11%), however, it was improved conservatively. During the first postoperative year, we had 25 cases of the upper gastrointestinal endoscopy, 17 cases (68%) of remained food debris in the stomach. Furthermore, we had 17 cases of the exacerbation of reflux esophagitis, including 5 cases of Grade B and 2 cases of Grade C based on LA Grade of reflux esophagitis. The symptoms were all controllable at PPI. All cases have no recurrence survival.

LAPPG for the early gastric cancer located in the middle thirds of stomach is minimally invasive and safe surgical procedure to be performed. In terms of the postoperative esophagitis, there needs to be further examination on the presence or absence of a hiatal hernia in the preoperative test.. 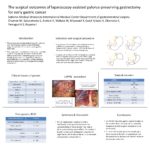