The Success Rate of Fundoplication Decreases after Each Redo Antireflux Operation

From 1995-2010, 13,050 patients were included in the study. Overall, 465 (3.5%) patients underwent at least one revision fundoplication. Out of the patients who had an initial redo antireflux operation, 19 (4.1%) went on to receive to a second revision, of which 2 (10.5%) underwent a third (Figure 1). During the 11-year study interval, no patient had more than three redo fundoplications. 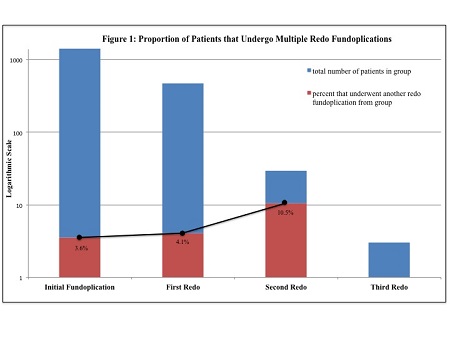 Increasing rates of second and third revision fundoplication suggest that the success of repeated revision antireflux surgery diminishes with each subsequent intervention.