Objective: The aim of this study was to evaluate the possible risk factors related to hypercoagulable state in the patients undertook LC.

Methods: This was a prospective control study. The total 50 patients suffering from gallstone undertook LC and were enrolled at Beijing Shijitan Hospital, Capital Medical University between November 2011 and February 2013. Based on the coagulation function, they were divided into two groups: hypercoagulable state group (group1) and non- hypercoagulable state group (group2). The following data were collected: gender, age, BMI, medical history, preoperative blood pressure, the time and pressure of intraoperative pneumoperitoneum, the operating bleeding and the time of operation. The serum levels of preoperative fast glucose, total cholesterol,high-density lipoprotein (HDL-C) and low-density lipoprotein (LDL-C) of them were evaluated. Before and at the end of pneumoperitoneum (i.e., 0 h after surgery) and at 8 hours after surgery, the coagulation function including the prothrombin time (PT), activated partial thromboplastin time (APTT), fibrinogen (Fib), thrombin time (TT) and D-dimer (DD) of each patient were measured. The results of two groups were compared statistically.

Results: Of the 50 patients, 22 were male and 28 were female. The mean age of the patients was 56.7±11.5 years (ranged from 29 to 78). All patients were successfully underwent LC and had no major complications. There were 25 patients in group 1 and 25 patients in group 2. The serum levels of preoperative total cholesterol,HDL-C and LDL-C were different significantly in two groups(P<0.05). Univariate analysis showed that age, preoperative blood pressure, HDL-C less than 1.25mmol/L and LDL-C more than 2.84mmol/L were risk factors (P<0.05). The patients of group 1 all had comorbidities such as hypertension or diabetes mellitus or hyperlipidemia. The patients had history of hyperlipidemia after laparoscopic cholecystectomy were prone to suffer from hypercoagulable state (P< 0.05). Multivariate logistic regression analysis showed that preoperative blood pressure, history of hyperlipemia and the serum level of LDL-C were the independent risk factors for the patients of group 1.

Conclusion: This study demonstrates that preoperative blood pressure, history of hyperlipemia and the serum level of low-density lipoprotein are the thromboembolism risk factors in the patients with hypercoagulable state underwent laparoscopic cholecystectomy and these risk factors should be paid more attention to. 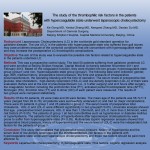