Since its introduction in 2011, single incision robotic cholecystectomy has gained in popularity. Numerous centers have adopted it as an acceptable alternative to conventional laparoscopic cholecystectomy. There have been numerous studies proving its safety and feasability in the elective, outpatient setting. However, its use in the acute setting has not been throughly investigated. The aim of this work was to further study the safety, feasability and efficacy in single incision robotic cholecystectomies performed specifically on inpatients.

A total of 84 cases were included in the study. There were 38 inpatient robotic single incision cholecystectomies included compared to 46 as outpatient. Average age for inpatients was 44.3 ± 15.8 compared to 56.6 ± 14.8 for outpatients. For inpatients, 44.7% had symptomatic cholelithiasis and 34.3% has acute cholecystitis. For outpatients, 74% had symptomatic cholelithiasis and only 1% had acute cholecystitis. The average length of case for the outpatient and inpatient group was 95 ± 34.2 minutes and 119 ± 33.8 minutes, respectively (p<0.005). There were two conversions to conventional laparoscopic cholecystectomy and one case in which one additional 5mm port was added. One of these conversions occurred immediately after the insertion of the robot laparoscope due to the presence of many adhesions. The other conversion was due to dense adhesions between the duodenum and gallbladder. There was one intraoperative complication which was an enterotomy caused upon initial abdominal incision. There were no deaths and no postoperative inpatient complications related to surgery. 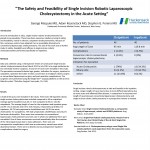