Introduction: The objective of this study was to determine the effect of supplemental tactile feedback on grip force during peg transfer training tasks using a laparoscopic grasper. A tactile feedback system was developed and integrated into existing laparoscopic graspers (Figure 1), allowing forces applied at the grasper tips to be felt by the surgeon’s hands on the handle.

This system was originally designed for robotic surgery and has been integrated into the da Vinci Surgical System, where tactile feedback is entirely absent. In a similar robotic surgery study we determined that adding supplemental tactile feedback significantly reduced the applied grip force when performing various tasks. The purpose of this research was to determine if that same effect was present in non-robotic laparoscopic surgery.

Methods and Procedures: Eleven novice subjects were asked to perform single-handed peg transfers using these laparoscopic graspers in three trials. (Feedback OFF, ON, OFF). The peak grip force (Newtons) during each grip event was measured using the grasper-mounted force sensors and averaged across the trial. Trials were compared using a Wilcoxon signed rank T-test, where each subject served as his or her own control. For each subject, grip force during the first trial (Feedback OFF) served as a baseline, and all other values are reported as a normalized percentage of this baseline. 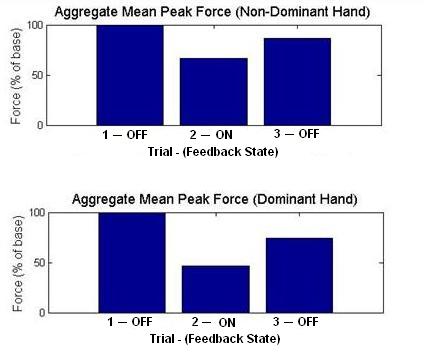 Conclusion: Laparoscopic surgery offers advantages over open procedures, such as increased recovery time, and decreased trauma and hospital expenses. However, the attenuated tactile feedback provided to the surgeon’s hands is a significant drawback. In this study, we found that supplemental tactile feedback can significantly reduce the grip force during laparoscopic training, a comparative finding to our previous study involving robotic surgery. 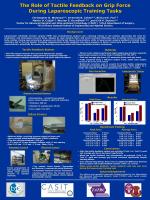