The role of laparoscopy on circumferential resection margin positivity in patients with rectal cancer: Long term outcomes of a single high volume institution

Background: Circumferential resection margin (CRM) is one of the main prognostic factors in rectal cancer. The aim of this study was to evaluate the influence of the laparoscopic rectal cancer surgery on CRM involvement.

Conclusion: Laparoscopic surgery for colorectal cancer is widely accepted due to its benefits of earlier recovery and shorter hospital stay. Similar CRM involvement and survival rates with laparoscopic resection have been recently reported with the increase in technical skills. Optimal postoperative clinical results can be obtained with surgeons who have adequate experience of colorectal surgery and laparoscopic skills. 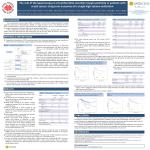