The Risk of Combined Organ Resection in Radical Gastrectomy 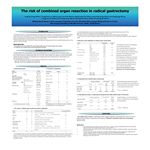