Introduction: Despite the success rate of laparoscopic fundoplication for gastroesophageal reflux disease (GERD) at around 90%, the patients who need maintenance therapy of proton pump inhibitor or re-do surgery for recurrence of esophagitis post-operatively are recognized. The aim of this study was to analyze the characteristics of recurrence cases investigating our experienced patients.
Methods: Two hundred and sixty-two consecutive patients underwent laparoscopic fundoplication for GERD in our institution between December 1994 and July 2008. Patients with strictly more than one year follow-up were chosen. Finally, 190 patients (113 men and 77 women, mean age was 53.8}16.1; 18-85) remained and were divided into the following 2 groups: 19 patients (10%) with recurrence of esophagitis and 171 patients (90%) with non-recurrence of esophagitis. Their clinical data collected in a prospectively fashion was retrospectively reviewed. The patientfs background, pre-operative condition, surgical results, and post-operative conditions were compared between the two groups.
Results: Recurrence group was significantly older than non-recurrence group (60.4, 53.1 years old, p=0.04), however, there were no significant differences in gender ratio, BMI, and disease length (p=0.05. 0.37, and 0.18, respectively). According to the anatomy-functional-pathology (AFP) classification, the degree and type of hiatal hernia (A factor) and the degree of esophagitis (P factor) were significantly worse in recurrence group (p=0.0001 and 0.03, respectively) but the degree of reflux (F factor) wasnft a statistical difference (p=0.32). There were no significant differences in blood loss and peri-operative complications (p=0.75 and 0.92, respectively). As to post-operative condition, the degree of hiatal hernia, esophagitis and reflux were significantly aggravated in recurrence group (p 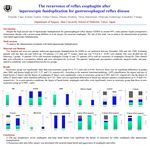