INTRODUCTION Laparoscopy is used increasingly for the management of small bowel obstruction, but the pooled data showed that conversion from laparoscopy to open surgery came to 1/3 of cases. Preoperative knowledge of factors that prevent successful laparoscopy could help in the decision to operate laparoscopically or openly. In this study, we tried to identify such factors by comparing the patients successfully treated with laparoscopy and those who needed conversion to open surgery.

METHODS AND PROCEDURES From June 2006 to March 2010, 30 patients underwent laparoscopic surgery for SBO at the Department of Surgery, Kyung Hee University Medical Center. The patients treated by laparoscopy were compared with those treated by laparotomy in terms of the differences in the preoperative laboratory findings, vital signs, previous abdominal surgery, duration of illness, bowel diameter on abdomen plain film and location of the transition zone on computerized tomography to identify the predictors of success or failure of laparoscopic surgery.

CONCLUSION There were no pre-operative predictive factors for successful laparoscopy, except for factors such as afebrility and previous gynecological surgery. Nevertheless, larger, randomized prospective trials will be needed to determine the predictors of success or failure of laparoscopic surgery. 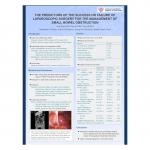