Purpose: To investigate the diagnostic accuracy of C-reactive protein (CRP) and white blood cell (WBC) for early detection of complications following laparoscopy-assisted gastrectomy (LAG) and to construct a nomogram for clinical dicision-making.

Methods: Clinical data of consecutive patients underwent LAG with curative intent between December 2013 and March 2015 was prospectively collected. Postoperative complications were recorded according to the Clavien-Dindo classification. The diagnostic value of CRP and WBC was evaluated by area under the curve (AUC) of receiver operating characteristic curve (ROC). Optimal cut-off value was determined by Youden’s index. Univariate and multivariate logistic regression analysis were conducted to identify risk factors for complications and then a nomogram was constructed.

Conclusion: CRP on POD3 and CRP-based nomogram contribute to early detection of complications after LAG. 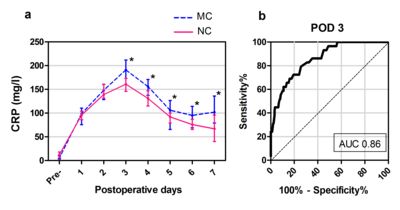 Figure 1. (a) The chronological changes of CRP concentration (median with interquartile range) for major complications (MC) and no complications (NC). *P < 0.05 (b) Receiver operating characteristic curve (ROC) for postoperative day 3 (POD3) CRP with an AUC value of 0.86.