The history of bariatic surgery is most marked by failure. The JI Bypass, the Mason Loop, The VBG, Jaw Wiring, the Balloon, Now more recently widespread and growing agreement around the world that the Band is a failure.

Each of these failed procedures follow a depressingly similar script. Introduction of the procedure to positive reviews followed by initially glowing reviews by early adopters followed by studies questioning the outcomes followed by growing reports of failure and finally by abandonment. We are in the near final phase of the band today in 2012. Many feel the Sleeve is in the process of following the same course of initial enthusiasm to be followed in short order by failure with weight regain and severe reflux over time.

The MGB was initially greeted with misguided skepticism because of MGB associations with the Mason Loop and lack of knowledge of the literature on Bile Reflux. The leadership of the national organizations were critical of the MGB and blocked presentation of the MGB at national meetings.

In spite of the active attempts of the leadership in bariatric surgery to suppress the MGB insightful surgeons with the courage and bravery to look beyond the unfounded criticisms of the MGB surgeons around the world looked at the underlying physiology of the MGB and began the first tentative international steps to adopt the MGB. These brave surgeons who questioned the unfounded critiques of the MGB and instead spurred on by failure of the Vertical Banded Gastroplasty, the RNY and the Band began to investigate the MGB. International leaders like Cabellro and Carbajo in Spain, Dr Wei J. Lee in Taiwan, LM Chevallier and Cady in France, Kular in India, Tacchino in Italy and Noun in Lebanon showed that with careful investigation the early claims of excellent success with the MGB were confirmed.

Now these pioneers have been joined by others around the world. Often with out support and occasionally with backbiting and criticisms these intrepid surgeons have followed the early adopters of MGB. These newer MGB surgeon’s research shows unequivocally that the good results of the MGB are confirmed. In Barcelona at the IFSCO-EC meeting 23 surgeons with experiences with over 13,000 MGBs reported uniformly good results.

After 15 years experience, numerous controlled prospective trials all confirming good results it appears that the MGB is rising to a recognized place in the list of acceptable bariatric procedures. Even more intriguing is the possibility that the MGB may well come to be identified as the best of bariatric surgical procedures. 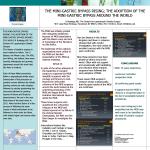