The metabolic profile of Fractures in the bariatric population: a single institution experience.

INTRODUCTION: Obesity is accompanied by substantial hormonal and bone metabolism changes which have been poorly understood and described inconsistently. The objective of this study is to assess the nature of these changes before and after bariatric surgery and their relationship with pathologic fractures.

METHODS: We retrospectively reviewed all bariatric surgeries between 2010-2015. Patients who suffered pathologic fractures were identified. Patients’ demographics, associated comorbidities, and laboratory values of: Vitamin D, calcium, and ALP were followed at three intervals for 1 year. Fisher’s exact test and paired t-test was used to determine significance. A linear regression model or Pearson correlation coefficient was used to assess relationship and significance.

RESULTS: From1129 bariatric patients 10.8% (n=122) fractures were identified, of which 53% (n=65) dated before surgery, 49% (n=60) dated after surgery, and 4.09% (n=5) dated before and after surgery. When occurring postoperative, the mean fracture occurrence was at 16.71±15.42 months after surgery. The population was predominantly women 63.9% (n=78). Laparoscopic sleeve gastrectomy (LSG) was the most prevalent procedure 51.6% (n=63) followed by Laparoscopic Roux-en-Y gastric bypass 22.9% (n=28). From122 fractures 104 vitamin D levels were identified. Pre-operative Vitamin D insufficiency was present in 37.5% (n=39) and deficiency in 23.07% (n=24). Post-operatively; vitamin D insufficiency was present in 30.7% (n=32) and 7.6% (n=8) had deficiency 6-months after bariatric surgery, whereas 32.69% (n=34) had insufficiency and 8.6% (n=9) deficiency, 12-months postoperatively. When compared to pre-operative, the difference in Vitamin D levels was found significant at 6 months (p<0001) and 12 months (p=0.0003) following LSG. In LYRGB significance was only found at 12 months (p=0.0101) post-operative. A linear regression model recognized post-operative relationship between BMI and Vitamin D levels but to be only significant at 12-months following bariatric surgery (P=0.0017). A negative-correlation between BMI and Vitamin D levels was identified and to be only significant at 12-months post-operatively (P=0.0418).The Relationship between sleep apnea and the occurrence of fracture pre-operatively was found to be significant (P=0.0348). ALP was consistently within normal values pre and post-operatively.

CONCLUSIONS: Obese patients have lower levels of vitamin D pre-operatively and post-operatively vitamin D levels improved. There is a relationship pre-operatively between sleep apnea and the occurrence of fractures. Prospective studies are necessary to further understand and recognize the risk factors for fractures so that interventions could be in place to minimize its occurrence in the bariatric population. 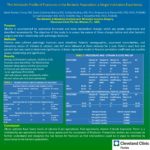