METHODS AND PROCEDURES: The first 61 consecutive TVC cases performed between August 2009 and August 2012, at an academic institution, were reviewed. A hybrid TVC was performed with a 5-mm umbilical trocar and a 12-mm transvaginal trocar with standard laparoscopic instruments. Two transabdominal sutures provided retraction of the gallbladder. Statistical analysis was performed using ANOVA and two-tailed t tests as appropriate.

RESULTS: Sixty-one patients underwent a TVC with an average age was 38 ± 12 years and average BMI was 29 ± 6 kg/m2. The mean operative (OR) time was 60 min ± 17 min (range 31-94 min). There were 1 major and 3 minor complications, and 1 conversion to conventional laparoscopic cholecystectomy (after transvaginal access). When patients were divided into sequential quartiles (n=15/16), shown in figure, the mean operative times were 67 min, 54 min, 56 min, and 64 min, respectively. There were significant improvements in operative times were seen between the first (15 TVCs) and second/third quartiles (p=0.04 and p=0.05, respectively). The fourth quartile, which marked the start of training a surgical fellow to independently perform TVC, was not different from the first quartile. Two minor complications (IUD dislodgement and urinary retention) occurred in the first quartile, as well as 1 minor (temporary brachial plexus injury) and 1 major (omental bleed) occurred in the second quartile. The conversion occurred in the third quartile. There was no difference in age and BMI between quartiles. Finally, there was no significant difference in OR times between obese (BMI>30) and non-obese patients.

CONCLUSION: In our experience, the learning curve of a fellowship-trained surgeon introducing transvaginal cholecystectomy to their surgical repertoire, as measured by improved operative times, can be achieved with approximately 15 cases. 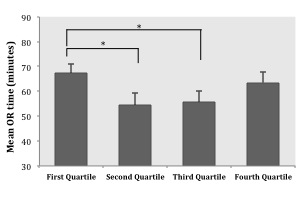 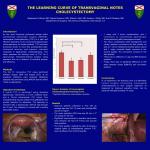