The Integration of Minimally Invasive Surgery in Surgical Practice: Results From Two Consecutive Province-wide Practice Surveys of General Surgeons Over a 5-year Period.

Introduction: Most surgeons have quickly embraced the practice of minimally invasive surgery (MIS); however, the introduction of advanced procedures appears more complex. The purpose of this study is to assess the evolution of MIS practice in Québec over a 5 years period in order to identify needs or ways for improvement in the modern surgical era.

Methods: We developed and test-piloted a self-administered questionnaire that was sent to Québec general surgeons in 2007 and 2012. It assessed four chosen domains: parameters of surgical practice, stated MIS practice, MIS training as well as barriers and facilitators to MIS practice. We performed univariate analysis to compare responses in 2007 and 2012, and multivariate analysis using logistic regression to assess the variables associated with the practice of advanced MIS.

Conclusion: We observed that from 2007 to 2012 there was a significant increase in the practice of advanced MIS procedures by general surgeons in Québec. More surgeons have integrated MIS procedures in their practice and this technique now appears well established in the current surgical practice. The growing place of MIS in residency training seems to be a paramount part of this development over the last 5 years. Results from this survey could be used as a baseline for studies focusing on ways to further improve the existing MIS practice and examine the need for integrating newer technological advances in the current practice, in relation with evidence-based data in the field. 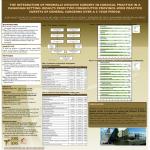