Introduction: Evidence from studies of implicit motor learning suggest that advantages accrue from discouraging the build up of verbal knowledge about the movements that constitute a skill. The advantages include performance that is impervious to demands present in challenging task environments (e.g., stress, fatigue or multi-tasking). The objective of the study was to examine the role of verbal guidance during laparoscopic skills training, asking whether a minor adaptation of the traditional Halstedian apprenticeship approach to laparoscopic training (absence of verbal guidance) allows similar advantages to accrue.

Methods: We trained 14 volunteers (M age = 23.43 years: 10 males) with no prior medical background to perform a laparoscopic suture with intracorporeal knot tie in a training box. All participants observed a standardized demonstration of the procedure performed by an expert surgeon (>500 laparoscopic procedures). For half of the participants the demonstration was accompanied by a running verbal commentary and the participants were provided verbal guidance when they practiced the procedure (Instructed-observation treatment condition). For the remaining participants the demonstration was not supported by a running commentary and no verbal guidance was provided when they practiced the procedure (Observation-only treatment condition). Participants observed the video demonstration before each practice trial and continued to practice until, on 3 consecutive trials, performance matched the surgeon. In a test phase, participants then completed a retention test (3 trials) and a multi-tasking test (3 trials). In the multi-tasking test the laparoscopic procedure was performed concurrently with a demanding cognitive task (random letter generation). Dependent measures were procedure completion time and number of hand movements (collected via the Imperial College Surgical Assessment Device).

Conclusions: An absence of verbal guidance during practice accelerated learning of a laparoscopic procedure and culminated in performance that was robust against the demands of multi-tasking. The findings imply that surgical skills training may be more effective if verbal guidance about the movements that constitute the procedure is avoided. 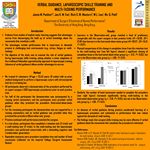