Introduction: To identify pre-operative, intra-operative, and post-operative variables that impact the long term results of laparoscopic Heller myotomy in patients with Achalasia.

Methods and Procedures: A retrospective record review and telephone interview with a standardized questionnaire was conducted on 122 consecutive patients who underwent a laparoscopic Heller myotomy from 1995 to 2008. A partial fundoplication was routinely performed. Information regarding re-intervention, residual dysphagia, postoperative reflux symptoms, medication use and satisfaction was obtained. Data are expressed as both means ± SD and median (± range). All variables were compared with the use of paired Student t tests for means and chi squre test for proportions. P values less than .05 were considered statistically significant.

Conclusions: Our results demonstrate that patients undergoing laparoscopic Heller myotomy by an experienced surgical team have great improvement in their symptoms and are very satisfied with the surgical outcome. The best results were seen in patients with a BMI<30 who had a Toupet fundoplication in addition to myotomy. Achalasia patients with concomitant hiatal hernias and/or BMI ≥ 30 were more likely to have post operative dysphagia than patients without these comorbidities. 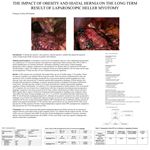