METHODS AND PROCEDURES: One hundred and twenty patients with advanced gastric cancer were operated on from February 2011 to April 2012, of which 61 patients with laparoscopy-assisted radical gastrectomy (LAG group) while 59 with conventional open D2 gastrectomy (OG group). Clinical data both of the two groups were analysised Following the patients once a month until July 2013 and recorded the ending of them.

CONCLUSIONS: Compared with conventional open D2 gastrectomy, the laparoscopy-assisted radical gastrectomy is safe and technically feasible with shorter incision, less bleeding volume and better post-operative recovery while there are no significant differences in radical degrees. And the rate of recurrence, metastasis and mortality are not remarkable increase in a short period. 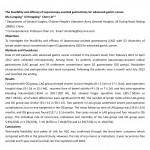