The Effects of Occupying the Working Channel on Endoscopic Manipulation

Introduction: This work aims to evaluate the hypothesis of reduced control with the introduction of endoscopic instruments in the working channel of an endoscope. Despite numerous studies demonstrating the safety and efficacy of endoscopic ultrasound, anecdotal reports suggest that the articulation of many flexible scopes become limited with the introduction of instruments in the working channel. This is exasperated in ultrathin scopes where the ultrasound array may impede manipulation ability. 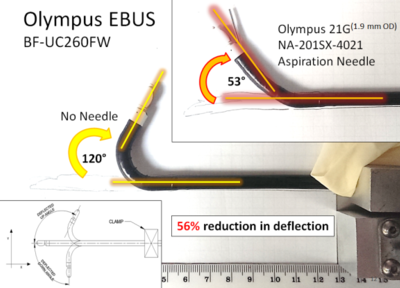 Methods and procedures: An Olympus Evis Exera BF-1T160 scope (n=1), Olympus BF UC260FW (n=1) and the Pentax EB-1970UK (n=2) were used to assess the hypothesis. Bench-top experiments measured the deflected up and down angle of the distal end with and without endoscopic instruments present. Aspiration needles and biopsy forceps of varying cross sectional diameters (21, 22 & 25 gauge) were introduced in a sequential manner and were extended to fixed distances beyond the distal tip. The corresponding tip deflection was measured using graphical analysis (AutoCad® 2014) and was compared to the manufactures specifications (see Figure 1). The scopes used in the study were selected due to their prevalence within national health centres and all scopes were confirmed to be in full working order in advance of the study.

Results: The results of the physical experiments highlight a clear reduction in distal end scope flexibility when actuated with endoscopic instrument present (see Figure 2). Instruments of larger cross sectional diameter tend to further exacerbate controllability. Furthermore the distance for which the instruments extend beyond the distal tip effects the accuracy of targeting by adding to the mechanical stiffness of the scope when positioned within the flexible distal end. 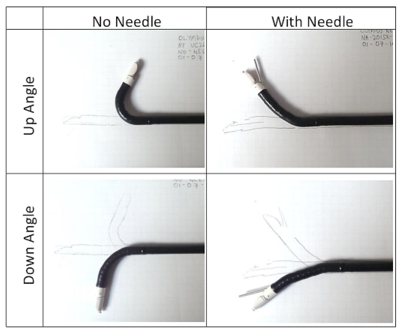 Conclusions: This study examines the hypothesis that scope control is diminished when endoscopic instruments are introduced in the ultrathin scopes working channel with an ultrasound array. Despite a limitation in the number of available test scopes (n=4), this study has identified a clear correlation between reduced scope mobility and the introduction of endoscopic instruments. The inclusion of an endoscopic instrument adds significantly to the mechanical stiffness of the distal end, preventing a tight radius of curvature. This observation becomes particularly critical during tortuous navigation, however future advancements such as flexible needles and ultra-thin scopes may improve manoeuvrability.