INTRODUCTION
With the advances in technology in recent years, laparoscopic procedures have gained popularity for gastrointestinal surgery. In Japan, laparoscopic distal gastrectomy has been frequently used for the resection of gastric cancer, especially in early phase. However, to make this procedure a standardized treatment, it is important to ensure that this complicated method can be performed in a safe and easy manner. For this purpose, co-ordination between the surgeon and assistants, appropriate surgical fields, and the use of the appropriate laparoscopic instruments in the correct place are crucial. So far, many useful energy devices for sealing vessels and reducing intraoperative blood loss have been developed in this field, such as vessel sealing systems and ultrasonically- activated devices. As each of these devices has unique advantages and disadvantages, the choice of the best instrument according to the intraoperative situation and site for dissection are important. We herein provide the first description of our techniques of comprising the combined use of a vessel sealing system and an ultrasonically-activated device. We also investigated the efficacy of the combined use of these two instruments in laparoscopic distal gastrectomy.
PROCEDURE
We introduced laparoscopic gastrectomy to our institution in 2007. During the early period, we had mainly used an ultrasonically-activated device for all operations. However, beginning in September 2010, in addition to the ultrasonically-activated device, we introduced a vessel sealing system. Briefly, to dissect thick fatty tissue, such as the gastrocolic ligament, we use the vessel sealing system. On the other hand, to divide relatively small vessels and to dissect the connective tissues around large arteries, the ultrasonically-activated device is used.
We compared the surgical data between two groups, that comprising patients treated exclusively using the ultrasonically-activated device group (USAD) and that where patients were treated with the combined use of the ultrasonically-device and the vessel sealing device (COMB) In addition, we investigated the data according to the body mass index of the patients.
RESULTS
Between February 2007 and September 2011, 74 consecutive patients who underwent laparoscopic distal gastrectomy were included in this retrospective study (the USAD group included 53 patients and the COMB group included 20). There were no significant differences in the clinicopathological parameters, such as blood loss, length of the operation, postoperative morbidity, and the number of harvested lymph nodes between the groups. When analyzed in patients with a body mass index of 24.0 and over, there was a trend for there to be less blood loss (294.9 ml vs. 204.5ml, p=0.20) and a shorter length of the operation in the COMB group compared with the USAD group (420.6 min vs. 362.4 min, p=0.17).
CONCLUSION
Our results showed that the use of both the vessel sealing system and the ultrasonically- activated device caused no significant difference in terms of blood loss or the length of the operation. However, for the patients with a BMI 24 or over, the combined use of these instruments appeared to reduce both the bleeding and the length of the operation. 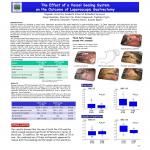