Introduction: Inanimate laparoscopic training techniques such as the Fundamentals of Laparoscopic Surgery (FLS) have a proven benefit on operative skills in trainees with little to no laparoscopic experience. In conjunction with these training techniques, three-dimensional (3D) imaging provides an added benefit to novice trainees with laparoscopic experience. However, the utility of 3D imaging with FLS based tasks in laparoscopy-naïve trainees is unclear. We aim to investigate the role of 3D imaging in laparoscopy-naïve participants using two FLS based tasks. We hypothesize that participants who utilize 3D imaging during these tasks will perform better than participants who utilize two-dimensional (2D) imaging. 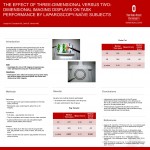