The Effect of Peri-operative Antibiotic Drug Class on the Resolution Rate of Hypertension After Roux-en-Y Gastric Bypass and Sleeve Gastrectomy.

Background: Recent studies have suggested that potential aberrant alterations in the gastrointestinal microbiome contribute to the development of cardiovascular disease, specifically hypertension. Bariatric surgery produces significant sustained weight loss and hypertension resolution likely through multiple mechanisms which includes beneficial changes in the gut microbiome. We hypothesized that the type of prophylactic antibiotic given for bariatric surgery could impact the resolution rate of hypertension by altering the post-operative gastrointestinal microflora.

Methods: A retrospective analysis of adult bariatric patients who underwent Roux-en-Y gastric bypass (RYGB) or sleeve gastrectomy (SG) between 2012 and 2016 was conducted. Patients were identified through the Metabolic and Bariatric Surgery Accreditation and Quality Improvement Program database. The standard antibiotic prophylaxis was cefazolin, or clindamycin in patients with a penicillin allergy. Univariate analyses were performed comparing the differing perioperative antibiotic treatments with resolution of hypertension at 2-week (±1 week), 6-week (±2 weeks), 3-month (±2 weeks), 6-month (±6 weeks), and 1-year (±2 months) follow up appointments. The criteria for resolution of hypertension was no longer requiring medication at time of follow-up.

Conclusion: This study represents the first clinical report to suggest an impact of the type of antibiotic administered at the time of RYGB on co-morbidity resolution, specifically hypertension. Future studies will be needed to confirm that the mechanism of action for this novel finding is due to the differing modifications of the gastrointestinal microflora population based on the specific peri-operative antibiotic administered. 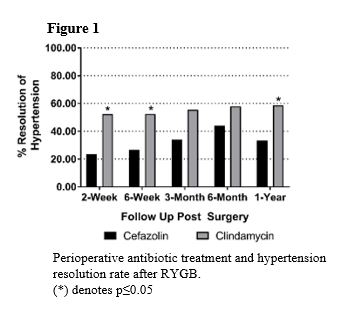