INTRODUCTION: The objective of this study was to determine the effect of hospital accreditation and other health system factors on all-cause morbidity after bariatric surgery in a publicly funded, universal healthcare system. Previous data demonstrates that patients who receive bariatric surgery at a Center of Excellence are different than those who receive care at non-accredited centers. Canada provides a unique opportunity to naturally exclude confounders such as insurance status, hospital ownership and lack of access on comparisons between hospitals and surgeons in bariatric surgery outcomes.

METHODS: This was a population-based study of all patients aged >18 who received a bariatric procedure in Canada (excluding Quebec) from April 2008 until March 2015. The main outcome of interest for the studies were all-cause morbidity during the index admission. All-cause morbidity included any documented complication which extended length of stay by 24 hours or required reoperation. Risk and reliability adjusted hierarchical regression models were used to determine predictors of morbidity.

CONCLUSION: This national study found that surgeon volume and teaching status were the most important factors in decreased all-cause morbidity after surgery in a universal healthcare system while hospital accreditation was not a significant factor. 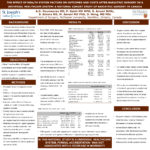