INTRODUCTION: We hypothesized that distance from a minimally invasive surgery (MIS) fellowship training site had a significant effect on the utilization of laparoscopy for rectal cancer at the neighborhood level.
METHODS: This was a population-based study of all patients aged >18 who received a low anterior resection for rectal cancer from April 2008 until March 2012 in the province of Ontario, Canada. The main outcome of interest was neighborhood rate of laparoscopy, split into tertiles (high, medium and low). Data was derived from the Canadian Institute for Health Information Discharge Abstract Database. Neighborhood socioeconomic status (SES),  rural status and distance from MIS fellowship training center were the main exposures. Ordinal logistic regression was utilized to compare odds of being in the highest utilization group to the middle and low utilization groups. A patient level multi-level mixed effects regression model was created as a sensitivity analysis. 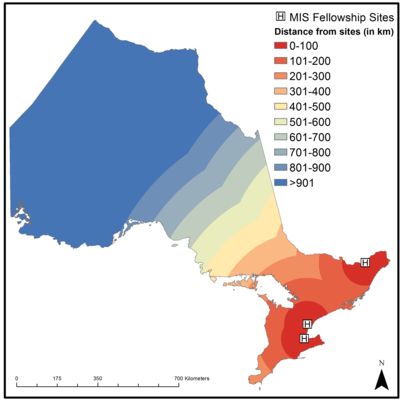 CONCLUSION: This study identified an unequal utilization of laparoscopy for rectal cancer within Ontario. Distance from an MIS fellowship training site was associated with lower odds of being in the high utilization group thus creating a clear disparity in healthcare delivery.