The Effect of Caffeine on Laparoscopic Skills Performance in Simulated Settings

Coffee is commonly consumed by many surgeons due to its suspected effect on both performance and mental alertness. Our objectives in this study were to evaluate the effect of different doses of caffeine on performance of laparoscopic skills in a virtual setting.

We recruited 28 medical students who fulfilled the inclusion criteria (no prior laparoscopic experience, virtual or otherwise). They performed laparoscopic tasks under three conditions: decaffeinated, 100mg caffeine and 200mg caffeine taken as coffee one hour before the task. Candidates were crossed over to the other caffeine doses on different days.

The tasks performed were: Hand-eye Coordination (task 3), Two-handed Manoeuvres (task 6), Cutting task (Task 7) and Electrocautery task (Task 8) using the Lap Mentor™ (Simbionix®). All the candidates performed 3 repetitions of each task. Performance was compared by measuring completion time, accuracy, number of movements and total path length. All data was collected in Excel and analysed using SPSS version 21. We used a tailed T-test and p-values <0.05 were considered statistically significant at 5% level.

Seventeen out of twenty eight candidates completed the study. There were 8 males and 9 females with a mean age of 22.4 years. Table 1 shows the difference by the candidates under the 3 different doses.

Caffeine had little effect on laparoscopic performance of basic tasks (task 3, 6), but had more negative effects on advanced tasks (task 7, 8) in a simulated setting though the difference was not dose dependent. Further studies may aim to evaluate whether this has any significance on clinical practice. 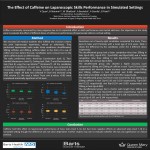