Introduction:
The purpose of this study is to clarify the difference in forceps’ impact to the ground between traditional laparoscopic surgery (LS) and single incision laparoscopic surgery (SILS), and to evaluate effectiveness of three-dimensional (3D) display in single incision surgery.
Materials and Methods:
We have developed a novel 3D dome-shaped display (3DD) system, CyberDome. We designed a task, “pulling a string”. Thirty two medical students at Kyushu University Hospital were conducted this task. None of them had any experience of laparoscopic surgery. After laparoscopic training by using the same task for 1 hour, the trainees did the task in LA and SILS with two-dimensional (2D) display and 3D display. The trainees conducted the task 4 times. The time required for the trainer, the number of errors, and the force added to the ground of this task were evaluated. In this study, Waseda- Kyotokagaku Suture No. 2 Refined II (WKS- 2RII) was used. Trainees were required to do the task on the WKS-2RII and we recorded the force added to the WKS-2RII. Statistical analysis was performed by the Wilcoxon singed rank test for the variance.
Results:
In SILS with 2D display, time was extended (106.0s vs 95.8s) and errors (4.9 vs 3.0) and force (121.4 vs 90.4) were significantly increased compared with the LS with 2D display. The increase in force was remarkable in the horizontal direction of forceps. In LS, the 3DD system significantly reduced the number of errors (1.6 vs 2.8) compared with the 2D display in the task. On the other hand, force (87.3 vs 90.4) and time (97.1s vs 94.0s) was not improved significantly. In SILS with the 3DD system dramatically improved not only errors (2.0 vs 4.9) but force (94.3 vs 121.4) compared with the SILS with 2D display (Fig.1). We further found that the 3DD system shortened the execution time (106.0s vs 96.9s).
Conclusion:
In SILS, trainees landed more forceps’ impact to the ground. SILS may require more rigid depth perception of surgeons than LS. The 3DD system is a promising tool for providing depth perception with high resolution to laparoscopic surgeons. The 3DD system demonstrates the effect especially in SILS. 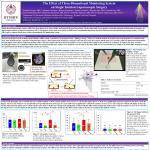