The Current Status of Laparoscopic Versus Open Colectomy: Incidence and Short Term Outcomes in a Cohort of 59,000 Patients.

Introduction: Despite research outcomes, there remain doubts regarding the short-term benefits of laparoscopic colectomy (LC) over open colectomy (OC). As such, many surgeons remain hesitant to take the necessary commitment and resources to introduce this highly technical procedure into their routine practice. In part, the lack of uniform acceptance of the benefits of LC has retarded its widespread utilization and implementation. The purpose of this retrospective study was to identify the current utilization of laparoscopic colectomy and to evaluate short-term comparative outcomes in a large cohort of patient presenting for elective and emergent colectomy.

Methods: The authors queried the de-identified Premier PerspectiveTM database for the data acquisition. This database provided information of discharge files from 348 health care facilities including urban or rural and teaching or non-teaching hospitals. Data analysis criteria included patients 18 years of age and older who underwent OC or LC between September 2008 and August 2010. The ICD-9 procedure codes were utilized to obtain the information of patients who had OC (codes: 17.31-17.39 and 45.81-45.83) or LC (codes: 45.71-45.79 and 45.82). Analyzed data included age, gender, diagnosis (benign or malignant disease), severity of illness utilizing the 3MTM APRTM-DRG analysis, type of admission (emergency, urgent, elective or trauma), type of procedure and operative time. Outcomes following colectomy including length of stay, total hospital costs, and readmission rates within 30 days following discharge were evaluated.

Conclusions: In spite of its safety, feasibility, and published benefits, we present current data indicating that LC remains underutilized in the United States, accounting for only one third of colon resections. The majority of LC procedures are performed for elective procedures involving patients of lower illness severity and results in shorter LOS, lower readmission rate and lower total hospital costs. 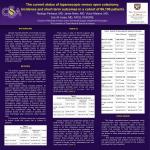