The Sleeve and the Band are popular and certified restrictive procedure for weight loss. Numerous studies show that Gastroesophageal Reflux (GER) is growing problem following the Band and the sleeve.

– Vaughn et.al. (1) showed that the risk of esophageal adenocarcinoma increased with frequent GERD symptoms; the odds ratio in those reporting daily symptoms was 5.5.

Studies reporting a growing rate of GER with the band and sleeve include:

– Leblanc (3) showed that 47.2% had persistent GERD symptoms.
– Weiner (4) showed that 15% of sleeve patients had severe gastroesophageal reflux requiring conversion to RNY.
– Gutchow (5) performed Upper gastrointestinal endoscopy patients after 30.1 months (range, 5-67 months), showing a high prevalence of esophagitis (30.0%).
– Himpens (6) showed that GERD occurred after 1 year in 22% of patients with Sleeve and after 3 years in 21% of patients with the Band.

Finally several cases of esophageal cancer after Band have been reported.

Conclusions:
1 Acid reflux unequivocally has been shown to be “a strong causative factor in esophageal cancer.”
2. Restrictive procedures (sleeve and band) cause increasing rates of gastroesophageal reflux over time of follow up.
3. Not unexpectedly, cases of esophageal cancer are being reported after the band.
4. Surgeons should consider warning their band and sleeve patients that the band and the sleeve may result in esophageal cancer. 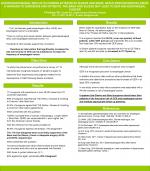