Methods
Medical records of 85 patients diagnosed as achalasia (2002-2012) were reviewed. Only patients underwent surgical myotomy or pneumatic dilatation were included. Patients who lost to follow up or had treatment other than surgical myotomy or pneumatic dilatation were excluded from the study. Standardized questionnaire of 4 symptoms were prospectively collected before and after treatment (August, 2013). These symptoms included dysphagia, regurgitation, chest pain and weight loss. Each symptom was scored range from 0 to 3 depending on symptom severity. Patients who had total symptom score more than 2 or underwent second intervention were considered as unfavorable outcome. 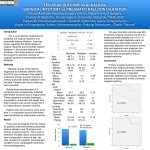