Taxonomy of Instructions Given To Residents in Laparoscopic Cholecystectomy

Laparoscopic simulation-based training has been focused on surgical skills training. The purpose of this study was to identify and categorize the explicit directional instructions made by attending surgeons to their residents in the OR in order to make recommendations for further simulation systems design. We hypothesize that OR-based laparoscopic surgery training is focused more on instructing residents in how to use the laparoscope and view the laparoscopic video.

This study is based on video recordings of ten laparoscopic cholecystectomies. The cases included three different attending surgeons and three different PGY4 residents in different combinations of the two groups. These videos displayed both the external audio/video showing the interaction between the attending and the resident as well as the internal video captured by the laparoscopic recorder. The data analysis was focused on identifying and comparing explicit instructions given by attending surgeons to their assisting resident.

The result of Wilcoxon signed-rank test on the frequencies of instructions normalized by the duration of each case shows that the frequency of gaze guidance is significantly higher than that of the instrument-control guidance (p=0.005), with a large effect size (r = 0.61) (Figure 1). 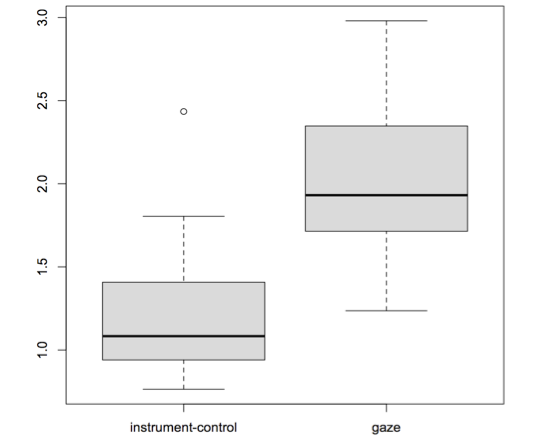 Our results present two major categories of instructions in OR-based laparoscopic training. These findings indicate that the focus of laparoscopic simulation training should include gaze guidance as well as skills guidance. Our findings could also suggest that novel approaches be designed to support gaze guidance by the attending in the OR. Finally, further steps can be taken to examine the physical and cognitive challenges for attending surgeons to show the residents what to see and the cognitive challenges for the residents in adopting the expert medical gaze during surgery.