Surmounting the Learning Curve of Three-field Mie: One Institution’s Experience

Introduction: Minimally-invasive esophagectomy (MIE) is a technically demanding operation and expertise is concentrated in a small number of high volume centers. Our institution has performed MIE for 10 years utilizing Ivor-Lewis, transhiatal, and 3-field techniques. Three-field has only supplanted transhiatal as our preferred approach since 2009. In this study we report our entire experience with 3-field MIE in order to better understand its learning curve at an established center of esophageal surgery.

Methods: The Natural History of Esophageal Cancer and Related Diseases database has prospectively accrued perioperative and long-term follow-up data on over 350 patients since 2004. After querying this database, 73 patients were identified as having undergone 3-field MIE between Oct 2005 and June 2011. This cohort was divided into an early and late group in terms of our experience with 3-field MIE. We hypothesized, based on existing esophagectomy literature, that a year in which greater than 20 3-field MIE were performed was necessary to surmount its learning curve. Thus the 35 patients who underwent 3-field MIE during the last 1.5 years of our experience were compared to the 38 patients who underwent MIE during previous years. Of specific interest were surgical morbidity, in-hospital mortality, and oncologic outcome.

Conclusion: Three-field MIE remains a challenging operation, even in a high volume center. An institutional experience of one year with greater than 20 cases is needed to surmount the severe learning-curve, and subsequently results significantly improve. It appears prudent for these cases to be performed at institutions with a significant commitment to esophageal surgery as volume does matter. 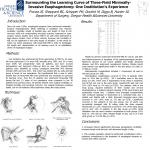