Case Report A 65-year-old male with no previous surgery presented to our Emergency Department with sudden onset of pain in suprapubic region and left lower quadrant associated with high fever and chills. On examination he was febrile, tachycardic, normotensive with suprapubic and left lower quadrant tenderness, guarding and peritoneal signs. His WBC count was 18,000 and CT scan of abdomen and pelvis showed giant jejunal diverticulitis (Figures 1, 2, 3). After the patient was resuscitated and started on broad-spectrum antibiotics, he underwent exploratory laparotomy. Intra operative findings showed giant jejunal diverticulum with inflammation and not abscess (Fig. 4). At surgery the diverticulum had a narrow neck, it was resected by transverse placement of TA stapler at its non-inflamed base (Fig.5). Upon opening the specimen, multiple enteroliths were revealed (Fig. 6). He had an uneventful recovery and he was discharge from the hospital on post op day 3. Pathology of specimen showed transmural necrosis of diverticulum and enteroliths. 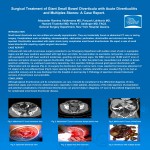