INTRODUCTION: Laparoscopic cholecystectomy is a common procedure in the United States, and is safe even in patients with acute disease.  However, some patients are still not candidates for urgent surgery; in these circumstances, percutaneous cholecystostomy may be used as a temporizing measure until patients can undergo definitive surgery.  This study examined surgical outcomes in patients who underwent percutaneous cholecystostomy (PC) placement, versus all other patients and versus those who underwent early laparoscopic cholecystectomy (LC).

METHODS: After IRB approval, 900 of approximately 3,000 cholecystectomies performed within one four-hospital system between 2009 and 2015 were randomly selected and retrospectively reviewed.  Pre-, intra-, and postoperative data were collected, including all complications within 90 days.  Early LC was defined as surgery within 7 days of admission for acute illness, per Gurusamy et al (2013).  Following preliminary data analysis, multivariable logistic regression models were generated to identify whether PC was predictive of outcomes of interest.

RESULTS: Of the patients reviewed, 35 (3.9%) had percutaneous cholecystostomy placement prior to cholecystectomy, all but one within our institution.  The decision to pursue PC versus early LC was made clinically by the attending surgeon; PC was preferred in patients whose disease severity, or comorbidities including postsurgical anatomy, pregnancy, or medical disease, made them poor surgical candidates. 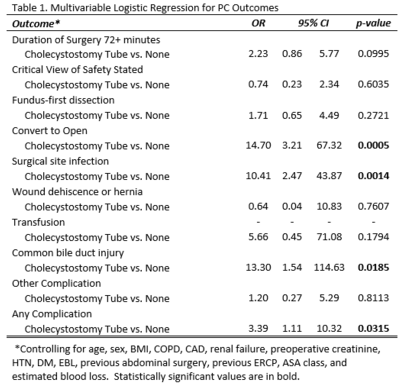 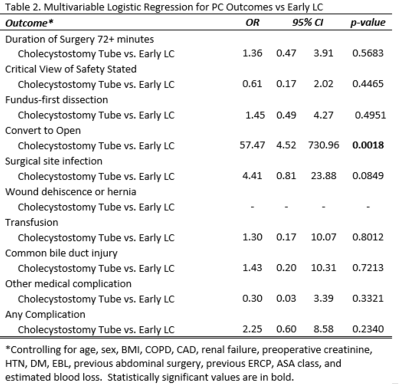 The average duration of PC was 57.6 +/- 33.8 days.  There was one CBD injury in the PC cohort, and three cystic duct stump leaks and three CBD injuries in the non-PC group.  There was no significant difference in operative duration, critical view of safety, or choice of fundus-first dissection due to inflammation between PC and non-PC patients.  Patients who underwent PC were more likely to have a surgical site infection or bile duct injury; although there were no significant differences in rates of wound dehiscence or hernia, need for transfusion, or postoperative medical complications, the PC cohort was significantly more likely to have any complication when all complications were pooled.  Compared to patients who underwent early LC for acute illness requiring hospitalization, the PC cohort remained significantly more likely to require conversion to an open procedure.  However, there were no differences in postoperative complications.

CONCLUSIONS: Although percutaneous cholecystostomy may be an appropriate temporizing measure in patients who are poor surgical candidates, it appears that surgery may be more difficult, even after the gallbladder has “cooled off.”  It is also important to counsel these patients about the potential for additional postsurgical complications.