Patients and Method: The patients more than 70 years of age who underwent LHD in our institution were extracted from the database. We analyzed patients’ background including timed barium esophagogram (TBE), pre- and post-operative symptom scores, and surgical results. Before and after surgery, the standardized questionnaire was used to assess the degree of frequency and severity of symptoms (dysphagia, vomiting, chest pain and heartburn). Moreover, satisfaction with operation was evaluated using the standardized questionnaire.

Results: Twenty-one patients met our inclusion criteria. Their mean age was 75.0 years and 13 of them were female. The mean length of symptoms was 165 months and many patients had progressive disease by barium swallow. The mean operative time was 178 (range 115-279) minutes and mean operative blood loss was 28 (range 0-150) ml. The median post-operative hospital stay was 5 (range 4-35) days. As compared to the pre-operative symptom score, the frequency and severity score of dysphagia were significantly lower post-operatively (p=0.0023, p=0.0054, respectively). And similar to dysphagia, the frequency and severity of chest pain were also significantly decreasing after surgery (p=0.0085, p=0.001, respectively). Two patients (9.5%) suffered from post-operative reflux esophagitis, but all patients were satisfied with the outcome of surgery.

Conclusion: LHD is a safe and effective surgical method even in elderly patients which is associated with improvement of symptoms and excellent patient satisfaction. 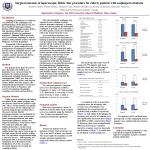