INTRODUCTION
There is an increasing preference for and documentation of benefits to patients undergoing laparoscopy, these benefits come at the expense of the surgeon in terms of posture as well as increased fatigue- with a higher load for single incision surgery over traditional laparoscopy, as shown in trainers. More than 750,000 patients per year undergo a laparoscopic cholecystectomy in the United States. With this large volume of procedures, there is a clear advantage in achieving patient and provider health, safety, and satisfaction. Therefore the goal of this study is to measure surgeon stress during single incision (SILC) versus traditional 4-port laparoscopic cholecystectomy using the Surg-TLX and other metrics after each surgery.
The stressors for the surgeon come mainly from the tools in the operative environment. The instrumentation for SILC is inserted through a single incision, creating technical challenges including hand collisions, in-line and transposed view of the instruments, and the surgeon’s close proximity to assistants which may increase the duration of surgeries, as well as the cognitive and physical stress on the surgeon, in turn leading to preventable errors that impact patient outcomes.

METHODS
The surgeon completed a survey including Surg-TLX (Wilson, 2011) and added questions (Beurskens et al., 2000; Trejo et al. 2006; Vassiliou, 2005) after they performed operative cases within a double-blind randomized controlled trial for single port versus four port cholecystectomy (NCT0148943). Thirty surgeries were studied, two converted from SILC to 4-port and were eliminated from the analysis. Kruskal-Wallis non-parametric ANOVAs on the dependent variables of the surgeon rating values by the variable of access (single-port vs 4-port) were performed with α=0.05 from 13 SILC and 15 4-port surgeries.

RESULTS
Significant dependent variables were the Surg-TLX question on physical demand (p=0.033), answers to the questions of the surgeon feeling the instruments were awkward to manipulate (p<0.001) and s/he were not able to perform fine or precision motions (p=0.018), with SILC significantly worse than traditional 4-port. Non-significant differences were found for length of surgery (median times for SILC=71min and 4-port=72min), , the Surg-TLX combined score, mental demand, complexity, degree of difficulty, difficult dissection, situational awareness, temporal demand and tiredness after the operation.

CONCLUSIONS
The survey worked well as a rating tool. Differences between the access were primarily physical. The stress of SILC vs. 4-port surgeries was demonstrated with the question about the physical demand (how physically demanding was the procedure?) with the median score of 9.5 out of 20 for SILC and 5.5 for 4-port. The post-surgery surgeon rating of their ability to perform fine or precision motions and the feeling that the instruments were awkward to manipulate was also significantly worse for SILC than 4-port. More interesting results were those that were non-significant, most notably the length of surgery. Other metrics that were expected to differ significantly were mental demand (p=0.392), degree of difficulty (p=0.531) – they were not even close. This may be due to the surgeon’s familiarity with SILC. The mental demand and situational awareness might be an issue for a less-experienced SILC surgeon. 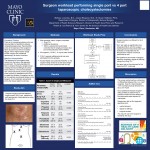