OBJECTIVES: Peritoneal dialysis (PD) has been shown to be a viable and attractive option for patients with end stage renal disease (ESRD). The United States lags behind many countries with the prevalence of PD only 7% of all patients with ESRD. Our research has examined how surgeon interest in PD catheter placement can facilitate the growth of a successful peritoneal dialysis program. We have studied the incidence of patients undergoing laparoscopic PD catheter placement during the years of 2012 through 2015 in the University of New Mexico (UNM) system.

METHODS AND PROCEDURES: Patients undergoing peritoneal dialysis catheter placement at the UNM during a four-year period (1/1/2012-12/31/2015) was examined via a retrospective chart review. UNM medical records were queried to find patients with operative reports who underwent laparoscopic PD catheter placement. Only patients with ESRD who were new to PD were included. The census of patients on PD at the largest partner of UNM (DCI – Albuquerque) was also reviewed on January 1 of each year.

RESULTS: Three surgeons in total performed placement of PD catheters in the years of 2012 through 2015 at UNM, for a total of 105 new patients being started on PD. Of the 105 patients, 86% of the above procedures were performed by one surgeon. The census of PD patients at DCI after the first year (January 2013) was 30, but increased to 48, 53 and 45 in the following three years. CONCLUSIONS: Laparoscopic PD catheter placement is a needed and beneficial procedure to offer ones community, and within a short time frame a viable referral base can be established. With one surgeon taking an interest in performing PD catheter placement, a program has been established at UNM, with numbers comparable to other centers in the United States. Future studies will look at the changing incidence of PD across the State of New Mexico. 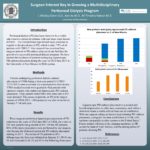