Introduction:
Supravesical hernia is a rarely reported type of abdominal wall hernia that is more commonly observed with the advent of laparoscopic surgery. We present a case series of groin hernia cases that were identified as having supravesical component on laparoscopy and were treated successfully with transabdominal preperitoneal repair (TAPP) repair.

Case reports:
During the study period 2005 -2006, five patients were identified to have supravesical hernia. The age range of these patients was 30 – 55 years. One patient had recurrent inguinal hernia. All of them were operated upon through laparoscopic approach to repair clinically identified inguinal hernias.

The peritoneum was dissected off beyond the midline and mesh was secured so as to cover supravesical, direct and/ indirect defects in all the patients.

All patients had uncomplicated recovery with no evidence of recurrence in the median follow up period of 5 years.

(Pictures will be presented)

Discussion:
Less than 100 cases have been reported in literature since the identification of supravesical hernia by Astley Cooper in 1804. Supravesical fossa is bounded by median and medial umbilical ligaments superiorly and peritoneal reflection over the urinary bladder inferiorly. A hernia starting in the supravesical fossa can progress either through anterior abdominal wall (external) or into the spaces around the bladder (internal, rarer variety as in our series). Bowel strangulation due to internal supravesical hernia has been reported. CT scan might be helpful in preoperative diagnosis.

It is vital to identify this rare type of hernia even in unobstructed patients as the mesh has to be fixed covering the defect, usually up to or beyond midline. Failure to treat the supravesical component may lead to persistence or recurrence of groin hernia. 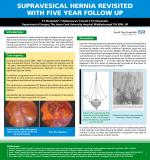