Although robotic-assisted surgery is being utilized more frequently for Urologic, Gynecologic and General Surgery cases, cost continues to be somewhat prohibitive.  Our aim was to compare supply utilization costs among 5 hospitals where robotic-assisted prostatectomies (RAP) are commonly performed.

Review of supply utilization cost data, procedure volume, case length and LOS from 5 hospitals within the Carolinas Healthcare System (CHS) during 2014 was performed.  Descriptive statistics were used to summarize the data.

Within CHS, there is a wide variety in case volume, OR time and supply utilization costs among the 5 hospitals that perform RAP.  The hospital that had the highest average itemized cost generally spent more on electrocautery, clips, and hemostatic agents.  Each hospital had the highest percent utilization cost in robotic disposables followed by kits/trays. 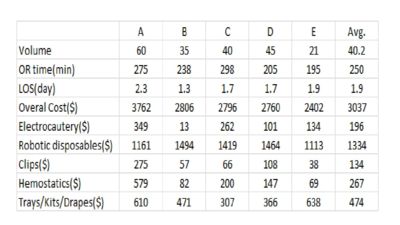