[Objectives] 3D surgery has recently been attracting attention with the gradual increase in the use of surgery-assisting robots with 3D imaging and the development of 3D endoscopy. There have been no multifaceted studies on the superiority of the 3D endoscope compared with the 2D endoscope in surgical procedures. Thus, we performed a following examination and report our findings herein.

[Subjects and methods] The subjects were 12 surgeons who were engaged in endoscopic surgery. A consumer camera, which was capable of obtaining both 2D and 3D images, was used. The time to perform 1 suture and 3 ligations was measured using a dry box. 2D and 3D endoscopes were alternately used to perform the measurement, 6 times in total. The number of mistakes in catching the string was also counted. In addition to the overall comparison of 3D and 2D endoscopes, a comparison was also made between the proficiency group of surgeons, who were skilled in performing endoscopic surgery, and the training group of surgeons, who were undergoing training for the surgery. Lastly, we administered a questionnaire survey regarding the superiority of 3D imaging using a Visual Analog Scale (VAS).

[Results] The time for suture and ligation was significantly shorter with 3D than with 2D endoscopy (P=0.016), with a significant difference in the training group (P=0.002), but not in the proficiency group. The number of mistakes in catching the string decreased significantly (P=0.008) in both groups (n=10) with 3D imaging. Using the VAS, it was found that suturing, ligation, surgical technique, depth perception, accuracy, and usefulness were 73, 77, 65, 81, 70 and 77 points, respectively, with the 3D imaging.

[Conclusion] It was suggested that 3D imaging might contribute to a shorter time for suture and ligation, and also increase the accuracy of the surgical technique, with a decrease in the number of mistakes in catching the string. In addition, 3D imaging was especially useful for the training group. A high satisfaction level was confirmed based upon the results of the questionnaire survey. 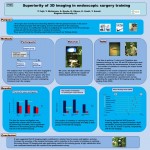