INTRODUCTION: Mesenteric venous thrombosis (MVT) is an uncommon yet potentially life-threatening complication. While MVT has been established in hypercoagulable states and local-abdominal processes (splenectomy, pancreatitis, diverticulitis), its incidence and pathophysiology in the setting of laparoscopic bariatric surgery alone is relatively unknown and rarely reported. From the 2543 completed laparosocpic bariatric procedures at our institution, we present two cases of superior mesenteric vein thrombosis following both laparoscopic roux-en-y gastric bypass procedure and laparoscopic gastric band placement.

DISCUSSION: A 42-year-old non-smoking female (BMI 38) who underwent laparoscopic gastric band placement, developed vague abdominal pain one month postoperatively and was found to have acute superior mesenteric vein thrombosis and jejunal wall thickening on radiographic imaging. A 53-year-old non-smoking male (BMI 46) who underwent retrocolic-retrogastric laparoscopic roux-en-y gastric bypass procedure, also developed abdominal pain ten days postoperatively and was discovered to have 60% narrowing and thrombosis of his superior mesenteric vein with associated jejunal wall thickening. Both patients completed a hypercoagulable workup; the female patient tested positive for protein S deficiency, while the male patient did not have a hypercoagulable predisposition. Both patients were treated with hydration and systemic anticoagulation with relief of symptoms. Follow-up CT scans demonstrated SMV recannulation in both patients. 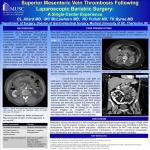