INTRODUCTION: Superior mesenteric artery syndrome is a rare entity of duodenal outflow obstruction caused by compression of the third portion of the duodenum between the superior mesenteric artery (SMA) and the aorta. The symptoms are variable and can result in intermittent, acute, or chronic partial or complete duodenal obstruction. It often poses a diagnostic dilemma.

CASE REPORT: An 86 years old woman presented to the emergency department with 1.5 month history of worsening epigastric pain, abdominal fullness, and bilious emesis. She admitted to relief of pain with gentle massage of the epigastrium. Her past medical history was significant for infra-renal abdominal aortic aneurysm of 3.2 cm and laparoscopic cholecystectomy. Her vital signs were normal, BMI 17 kg/m2, abdomen was soft, distended, and nontender. The placement of a nasogastric tube was followed by drainage of 1 L of bilious fluid. Laboratory data were within normal limits. A computed tomographic (CT) scan of the abdomen revealed marked proximal gastroduodenal distension with complete obstruction of the third portion of the duodenum. CT angiography identified an aortomesenteric angle of 22° (normal 38-65°). She failed conservative management. A laparoscopic loop duodenojejunostomy was performed without complications. Oral caloric and nutritional supplementation was started and she was discharged from the hospital. She continues to do well at 2-month follow up.

DISCUSSION: Any process that narrows the aortomesenteric angle can lead to SMA syndrome, including weight loss leading to depletion of fat pad around the SMA; scoliosis surgery resulting in lengthening of the spine; abdominal surgeries, such as ileal J-pouch anastomosis, that result in caudal pull of the small bowel mesentery. The diagnosis of SMA syndrome is based on clinical symptoms and radiologic evidence of obstruction. CT criteria include an aortomesenteric angle of less than 25 degrees and an aortomesenteric distance of less than 8 mm. Traditionally treatment has been conservative consisting of nasogastric decompression and hyperalimentation followed by oral feedings. Correcting the geometrical configuration, as achieved in some patient cases by weight gain and redeveloping the fat cushion around the SMA, may be associated with prolonged therapy, long hospital stays, and high costs. Conservative management is associated with low success rate in patients with chronic obstructive symptoms. Surgical options have evolved. Previously duodenal mobilization, known was Strong’s procedure, was the operation of choice. However it has a 25% failure rate. Current literature supports duodenojejunostomy as the operation of choice with a success rate up to 90%. 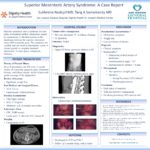